Eric Nolan asked:
When you mix, do you pretty much leave the EQ and other guitar effects the same once you find your sound or do you find yourself starting with a clean slate every song and exploring from there?

My guitar EQs are guitar-specific, meaning they are created for each guitar and because of that particular guitar’s acoustic properties. EVERY guitar’s sound has an ugly component somewhere, some part of the sound that is boomy or muddy or otherwise not right. An easy way to find this component is to insert an EQ on the guitar track and to sweep the frequencies one suspects of unpleasantries, while boosting the EQ. Now the bad stuff will jump out and be very obvious. Narrow the EQ to taste, then roll off those frequencies. Save this as a preset for that guitar. That guitar EQ should work every time, but you will have to adjust it when using a different microphone.

I always have at least two EQ presets for every guitar, one for RGtr (rhythm guitar) and one for MGtr (melody guitar), with the rhythm guitar EQ rolling off a little of the general low end in addition to the above described surgical removal. I often play several RGtr tracks (the chorus of Barcelona Nights was made up of three RGtr tracks and two MGtr tracks) and if I leave the RGtr tracks too “thick” they will take up too much room. I also EQ reverb returns, but I’ll save that for another time.

This gives me an idea: it might be interesting for some of you if this could be a component of the subscription site: I could record a video or do a screencast of a mixing session and explain why I record, mix, master the way I do. Or perhaps the occasional Zoom session to answer questions.

I recorded some guitar playing yesterday. It was the first recording since sometime in the Spring of 2021. Well, it wasn’t the first recording, strictly speaking, that happened earlier this week with an electric guitar and using a different interface, but it was the first recording of the Flamenco guitar, using the combination of interface and computer that I intend to work with from now on. It took quite a few hours to get the equipment to see each other. And earlier there were many hours updating and installing software – and finding out about the difference between cables that look the same but are not…

I was unhappy with how long it was taking but it was pointed out to me that I had been extremely unrealistic. After living there for 29 years, I sold my house and studio just a little over a year ago, bought a new place, moved my belongings, set up the new home, got further distracted by falling in love with Lisbon and also setting up an apartment there. Switched from a very familiar 2003 computer to a 2021 computer, new software, new equipment. What did I expect, for all of that to magically happen overnight? Yeah, mostly that. 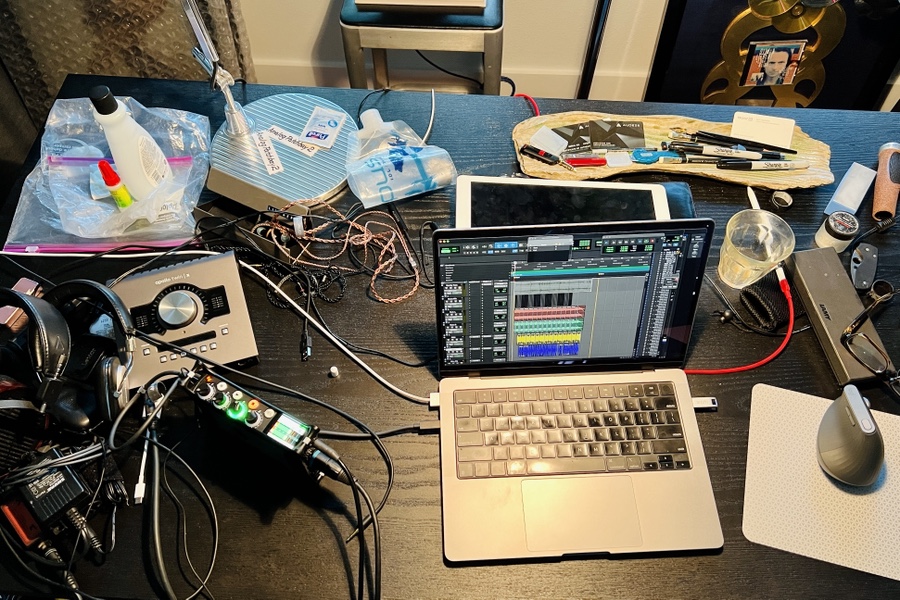 What will happen next? I don’t have an ideal recording room. I will familiarize myself with the equipment I want to use, now that it is all working together, will make recordings even though they won’t happen in a nice room or will have perfect fidelity, but the point is to become familiar and comfortable, intimate, with the gear. Once that is accomplished I will look for a nice room to record in. Have gear, will travel. I will literally need only one outlet to power everything, so the room can be anywhere.

Slowing down sounds was going to happen sooner or later. I slowed down a couple of rain recordings and mixed them together and now I listen to this and enjoy it just as it is. Eventually a guitar idea will (probably, hopefully) crawl out of this primordial soup of slowed down rain sounds.

The other thing I noted is that there are definite pitches in most rain recordings. Can’t fight those pitches and will have to find harmonies that go with them.

First thought that this album could be a dumb idea but as usual will forge ahead. What’s the worst that can happen. :-)

In a song one sometimes stops the rhythm for beat, in order to emphasize a note or chord that becomes clear because of that pause in the rhythm. How would that sound with a rain rhyhtm? What if I, instead of muting the rain rhythm, make it sound as if one had raised one’s hands to cover the ears for a moment. What does it sound like when I cover my ears? Drop of volume, sure, but perhaps that needs to be combined with a EQ change? Not a drop to silence but a drop down to softness.