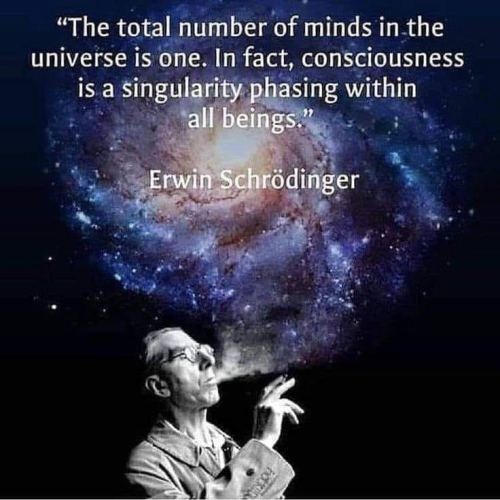 Schrödinger was a Quantum Physicist – wikipedia link – who is known for the Schrödinger’s Cat thought experiment, devised in a discussion with Albert Einstein.

If the world is indeed created by our act of observation, there should be billions of such worlds, one for each of us. How come your world and my world are the same? If something happens in my world, does it happen in your world, too? What causes all these worlds to synchronize with each other?
There is obviously only one alternative, namely the unification of minds or consciousnesses. Their multiplicity is only apparent, in truth there is only one mind.

This is also the perspective of many Eastern religions and philosophies. It is reassuring that scientists and mystics can come to the same conclusion.

If we extend the idea that we don’t originate our own consciousness but rather are part of a larger consciousness we might also question the idea of self. We might consider that the sense of self is merely the result of identification with this body and mind. We identify with a body that was “remixed” from our parents genes, identify with the culture we were born into, and with the society we were raised in.

To me it seems that letting go of the idea of self is an unburdening. Ah, I don’t have to carry that any longer. Put it down now, take a load off. It’s just a construct and keeps me from seeing reality.

We say people who help others, without worrying about themselves, are “selfless”. More likely we are all selfless and most of us simply forget that.

When we really operate well, when we are in the flow – this goes for musicians, painters, but also for nurses, software programmers, in fact anyone can experience this – there is no sense of self at all. There is only the action that is required by the nurse or doctor, the musical note that has to be played, the brushstroke that must be executed. There is no longer a driver, only the driving. Ayrton Senna famously said of his legendary qualifying lap at Monaco in 1988: “I was no longer driving it consciously.” No driver – only driving.

While I was waiting for a cortado (same amount of coffee as a cappuccino but a little less milk) a husky took off from the cafe and ran diagonally across the intersection. It was totally oblivious to the fact that it was dragging a table, to which the leash was attached, with it. After all, huskies have a history of dragging sleds for long distances. A human ran after the dog and brought both back to the cafe. Nice try, dog.

I prefer a cortado over a cappuccino because the taste leans a little more toward the coffee. Many call the cortado a gibraltar. Why you ask? This is the story I heard: while training baristas Blue Bottle would have them make coffee with smaller amounts of milk/foam than one would use for a regular cappuccino because why waste milk for training. Makes sense. Blue Bottle was asked what this drink was called and since they used the Gibraltar range of glassware by an old American company called Libbey they replied it’s a Gibraltar.

A cortado is the same drink as a gibraltar, but there seems to be a regional preference for using one or the other name on a cafe’s menu. Most baristas understand either term, however, if you want to try it. 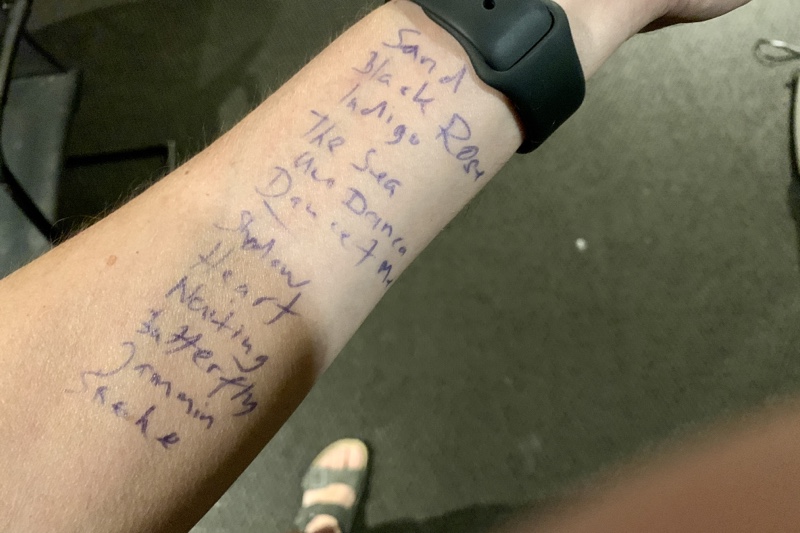 A half hour before the show I wrote down a set list on a sheet of paper but realized that I wouldn’t be able to read it because I am short-sighted and don’t like to wear glasses on stage. The reason I don’t wear glasses is that I don’t like the focus lines around my view of the guitar’s fretboard. Better to see the guitar right in front of me and the audience blurry, I feel.

If I had remembered to bring artist tape I could have written the list on that and taped it to the guitar. Instead I wrote the list on my arm. It worked just fine.

We played a lot of new pieces and, amazingly, remembered all of these new arrangements. It was great to perform again and we enjoyed it thoroughly. The audience seems to have a good time, too. I was told that for many in the audience it was the first concert in a long time. 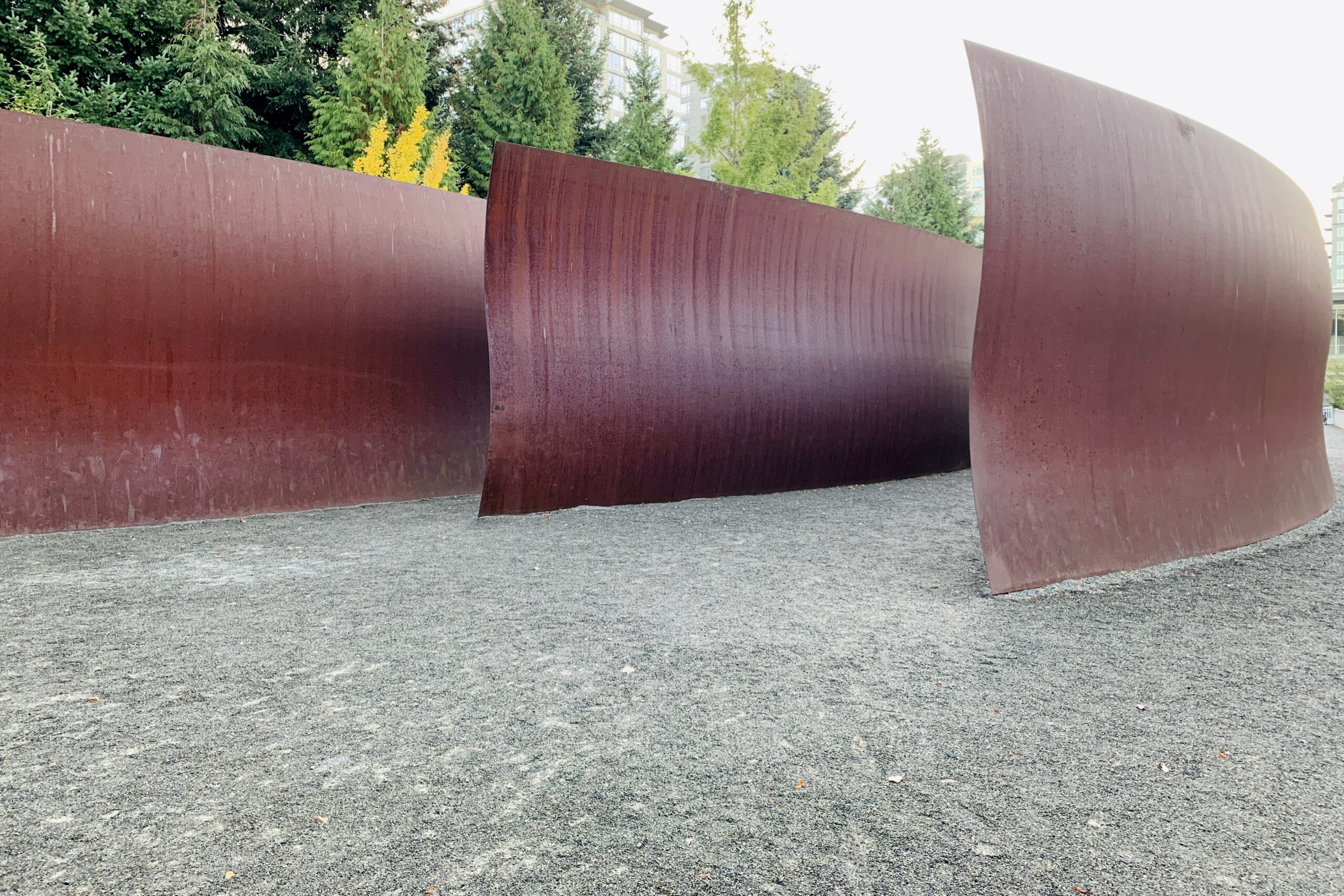 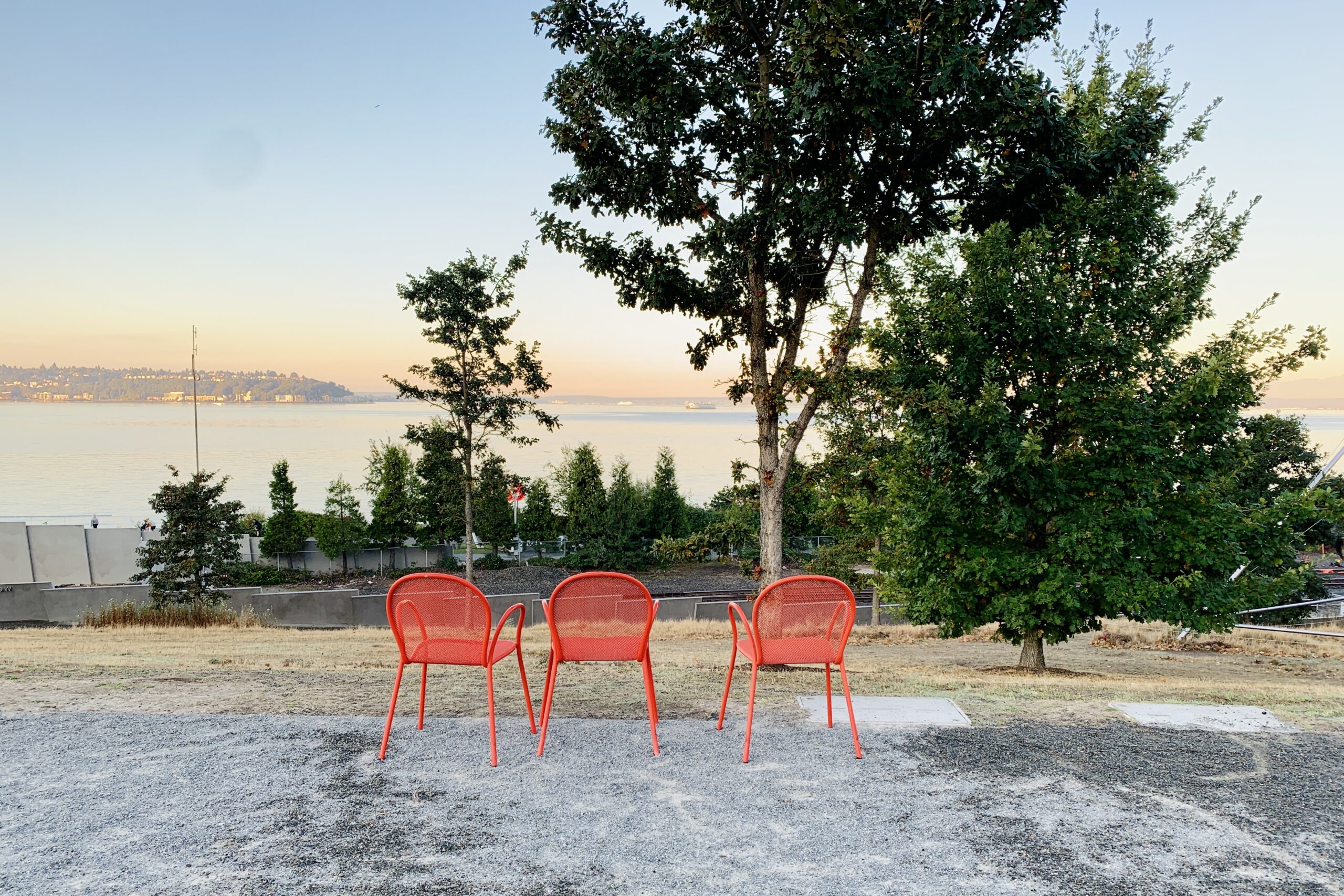 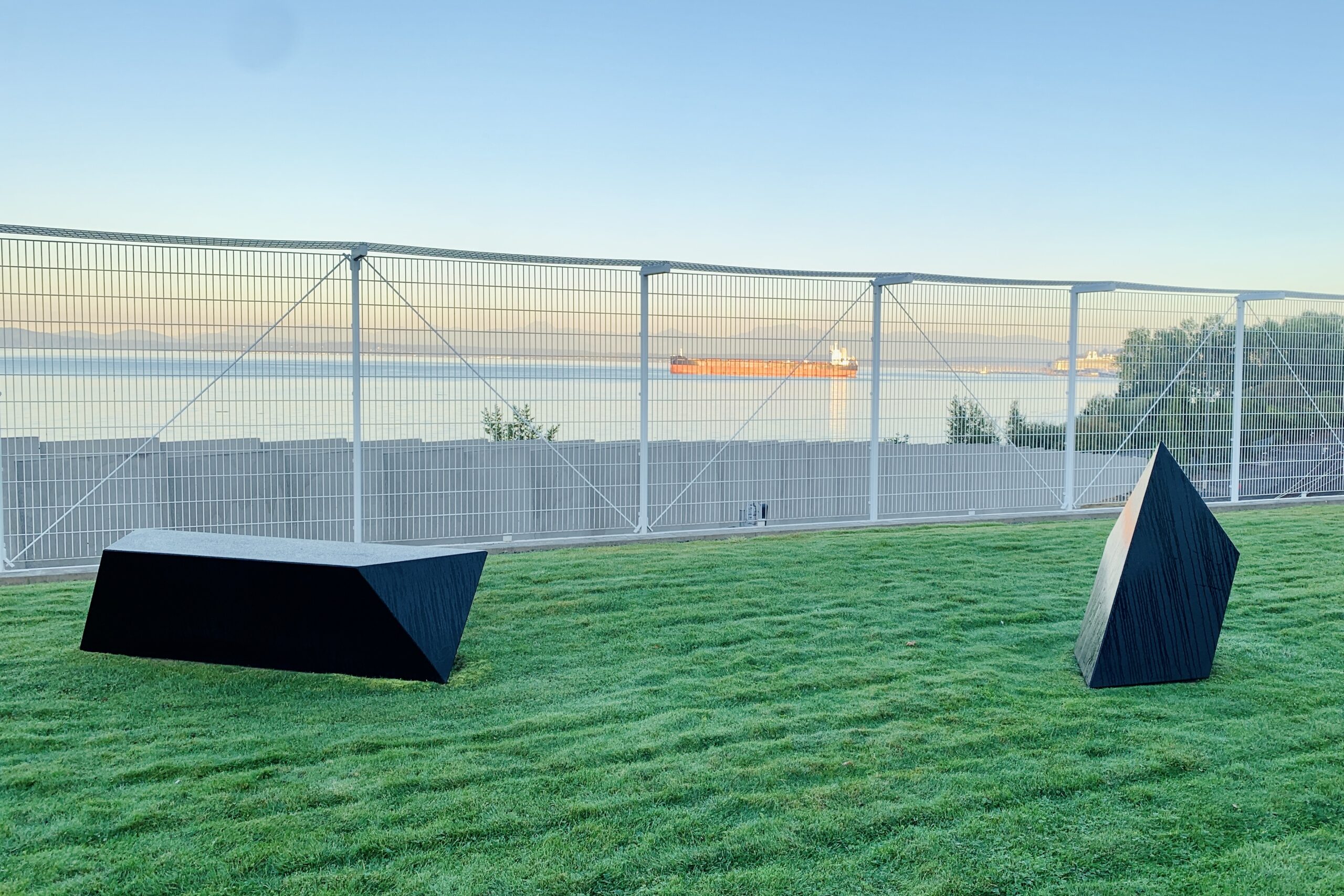 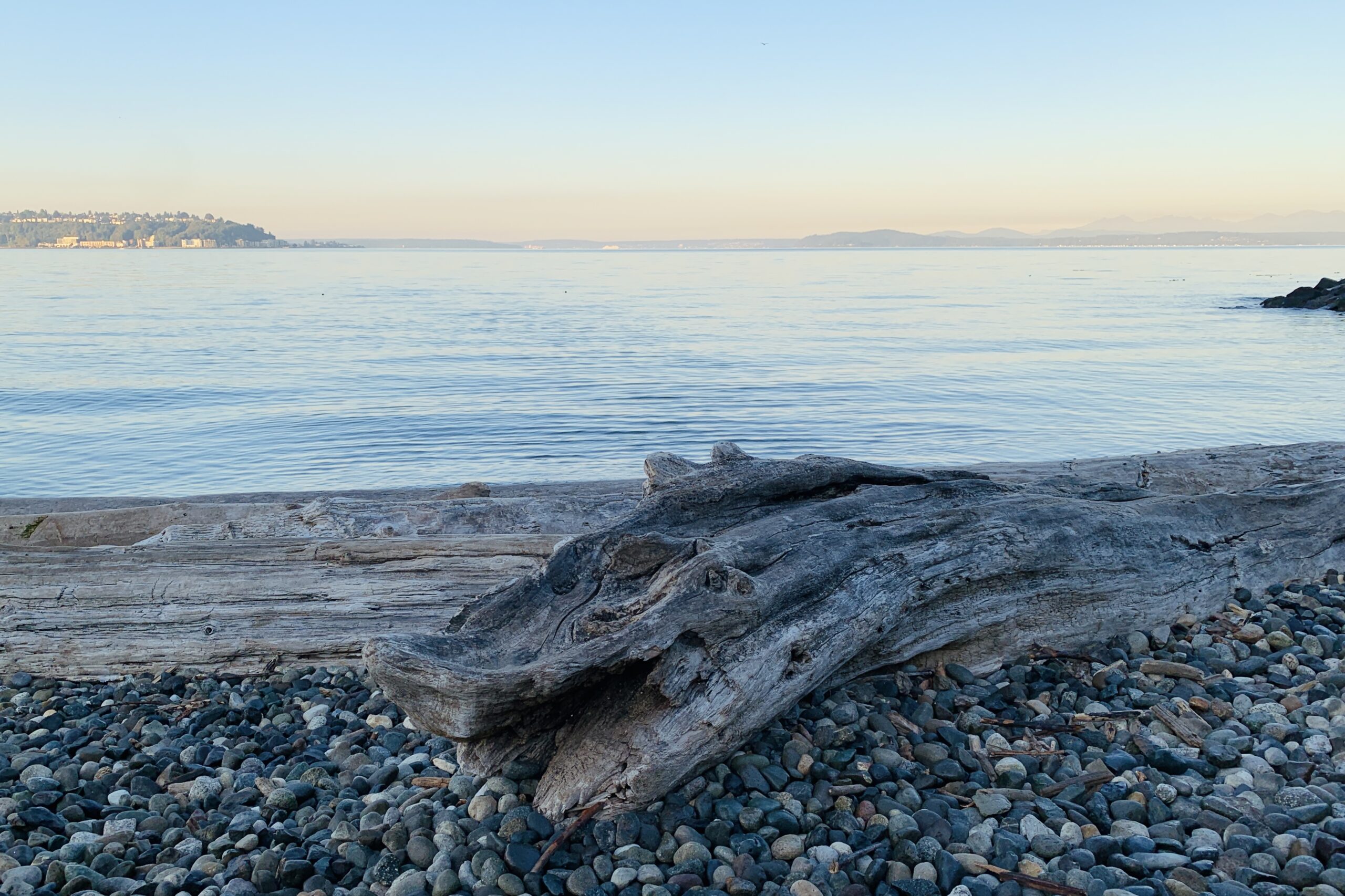 Yesterday I felt a little overwhelmed by the bustle of the city. This morning I got up early and walked to a quiet spot I like. These are a few photos I took with my phone.

There is a lot of exciting research into psychedelics happening right now. Depression, end of life care, PTSD are just a few areas where psychedelics may have a big positive impact.

Both the podcast and the video are excellent. Check them out.

In the summer of 1978 I lived near the beach on Phuket in Thailand. In those days the island had not been developed yet and there was only one hotel. I never looked at the hotel because I found something I liked better. For $1.50/night I stayed in a hut by the beach for several weeks. Several people I met told me to order a mushroom omelet at the little cafe on the beach. They smiled when they suggested this. One morning I decided to order this mystery omelet. The rest of that day I spent on a rock in the surf and in my hut, meditating. It didn’t occur to me that I had taken a drug because to me, after three years of daily meditation, it didn’t feel different.

Recently, neuroscience has confirmed a connection between meditation and psychedelics in that MRI brain scans taken of people meditating and of people taking psychedelics look very, very similar.

In fact I felt that the trip was simply an extension of my meditation practice. What I mean by that is that the experience was somewhat like riding an e-bike. I am still riding the bike and I am still pedaling, but the e-motor helps me get up to speed quicker and makes the climb a little easier. And it is true that many, many people turned to meditation after such a psychedelic experience. In fact, American Buddhism might not have happened without people who, after psychedelic experiences in the 60s and 70s, traveled to Asia to learn meditation and brought back what became Western Buddhism. Or take Dr. Alpert as an example, who became Baba Ram Dass. In any case, that day I laughed so much that my whole mouth was tired the next morning. Smiling so much can wear you out… :-)

Here is a selfie I took in my little hut on Phuket.

Here is a quote by Michael Pollan – from the above-linked video.

I mean the two biggest problems we face as a civilization I would say are the environmental crisis and tribalism. Both come from the objectifying of the other and therefore the willingness to exploit the other whether the other is people of a different faith, people of a different race, or nature, and so a solvent for this kind of thinking is exactly what the culture needs right now.