This morning I read Gender Pronouns Are Changing. It’s Exhilarating. and enjoyed learning a few things about English.

I have been in Santa Fe for almost a week. My guitar needed a little bit of work and I left it in the hands of the luthier before I rode out of town on August third. It was only the second time in four decades that I was without a guitar for six weeks. I think the break was good for my hands. Last week I picked up the guitar and started to reacquaint myself with it. Yesterday and today we rehearsed. We all missed making music a lot and look froward to this little tour. We will perform some of the favorites, but also new pieces from vision 2020 and from Bare Wood 2.

On this day in 1975 I saw Earth, Wind & Fire and Santana in Köln. It was a life altering experience.

Music and the Heart

How Music Can Literally Heal the Heart.

The reason these heart-music mappings work is because abnormal heart rhythms tend to form simple inter-beat-interval ratios. In fact, the distinctive rhythms in Beethoven’s music so closely resemble those of heart rhythm disorders that cardiologists have speculated that they may be transcriptions of Beethoven’s possible arrhythmia, his interoceptive awareness of his own heartbeat enhanced by his deafness.

Lemons >>> make lemonade. Arrhythmia of the heart >>> compose great music.
There is something important hiding in this. Our very shortcomings, our problems, our flaws, can help us reach for something amazing.

On The Ethan Hein Blog I found a nice list of recordings of Nature Boy.

There was a boy, a very strange enchanted boy. His name was eden ahbez, he was a hippie decades before that was a common thing to be, and he wrote “Nature Boy“, which Nat King Cole turned into a major hit. The tune has become a jazz and pop standard, and has been recorded uncountably many times.

I am listening to the version David Bowie recorded with Massive Attack, which I hadn’t heard before. It’s apparently from the movie Moulin Rouge.

My favorite version of Nature Boy isn’t on the list, however. It’s from the 1999 album Fascinoma by Jon Hassell. This version begins with solo trumpet – the softest trumpet sound you will ever hear – and then Rono Majumdar joins the trumpet with his bamboo flute. Check out the album Hollow Bamboo by Rono Majumdar, from 2000, as it is also excellent.

I remember talking to my friend CR about the song and she had a great story about meeting eden ahbez, the Nature Boy of the song. I’ll ask her about that.

Your periodic reminder that Yusef Lateef recorded himself blowing over a record from the 1930s and put it on one of his albums, a breathtakingly fresh idea and one that I would love more jazz musicians to try

I just listened to this piece that was relesed in 1976. Very cool. I looked up copyright rules and learned that until 1978 music copyright was 28 years with an option to renew for another 28 years. The option had to be picked up in the 28th year of the original copyright term. The copyright holder could have easily missed the deadline or lost interest, so the copyright of the original music Yusef Lateef played over likely had expired.

When you just want to play your guitar but your Dad is that dude from Pink Floyd! 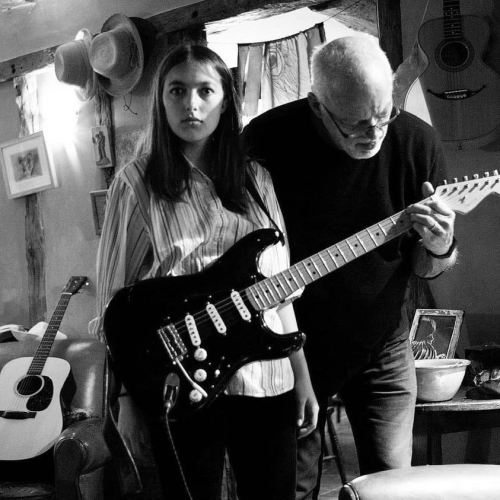 I’ll end with this tweet. I love the comment: I ordered beer, so why did they bring me beer?

Yesterday my RSS reader delivered a post called Thoughts on Reincarnation to me which prompted me to look up my own post called Memory Leaks from 2006 – by the way, the search function of the Diary works quite well and I use it often.

I wrote about “crossed wires” and “leaky memory” and the other post, very sensibly, points to DNA. Both posts start with the premise that everything is not only connected but one. Follow that with this thought about the universe:
Physicist: The Entire Universe Might Be a Neural Network.

On a different note, yesterday I ate breadfruit for the first time, roasted on a small fire. I found that it does indeed taste like sweet and doughy bread. Also reminded me a little bit of stealing a bite of raw dough from the kitchen table when I was little. I really liked it. I learned that the British brought Breadfruit from Polynesia to the Caribbean to feed slaves. Next I want to try breadfruit chips and breadfruit curry.