Roots reaching towards the ground, to eventually become an additional trunk. 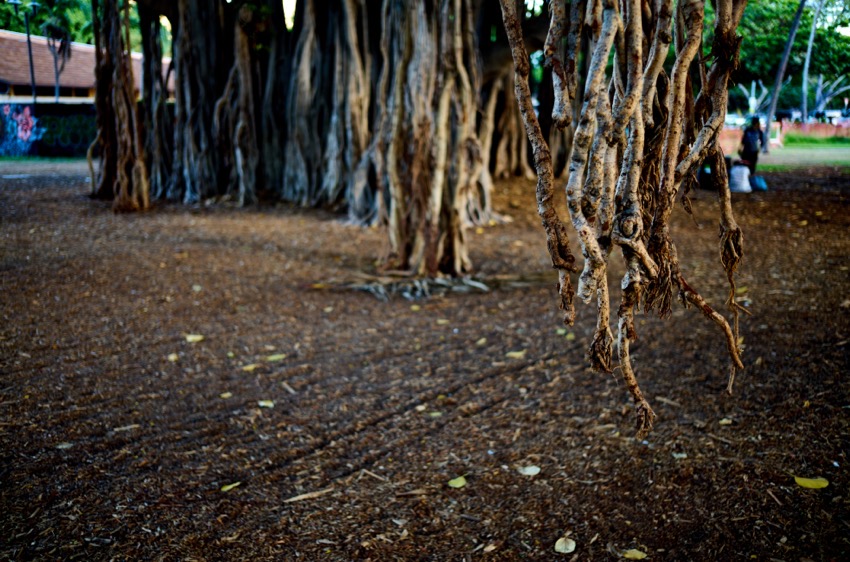 The big Banyan tree on Maui often wears little plastic buckets with water in them, hanging just below the reaching roots, to encourage them to extend downwards. I experienced that tree many years ago, in 1995, and learned that Japanese gardners had nurtured it for much of its 150 years. Japanese are the second largest ethnic group in Hawaii (link) and Ewa Villages, near Honolulu, has a population that is nearly 70% Asian. That Banyan in Maui is a wonder to behold. It is about 60′ tall and 200′ wide and fills most of the block that makes up Banyan Tree Park on Front Street, behind the Lahaina Harbor.
This tree is small compared to that giant, and it doesn’t get the loving care of that Banyan on Maui, but it looks well. Give it some time…

I have been staring at this image for a while. Multi-generational planning and building and tending to. It’s very beautiful, isn’t it! I found it here. The linked article is about a design book that contains this example.

One of the loveliest examples comes from one of the wettest places on Earth and one of the most ancient cultures — the Jaintia Hills of the Meghalaya region of Northern India, where during the monsoon season severe rains transform the hills into hunchback islands rising from the flood.

To traverse this Venice of the rainforest, generations of local Khasi people have developed a system of astonishing living bridges, made by training the aerial roots of the native rubber fig tree (Ficus elastica) along the trunk of a betel nut palm tree (Areca catechu) laid across the ravine.

The living bridges are a valiant antidote to instant gratification: It takes a decade of tending before a bridge can support human weight at all. But within a generation, by a slow-blooming miracle of growth, gravity, and devotion, each bridge can carry as many as fifty people at once. With every passing year, with every new generation trained in training the trees, the bridge grows stronger and stronger, its lifespan stretching into centuries, far outliving the first human hands that twined the first rubber fig roots.

This morning I was thinking about two ideas which oppose each other, kind of. The idea of concrete as a an attempt to create a permanent structure and an idea I remember from a book by Isaac Asimov I read a long long time ago. I remember a world in which things that weren’t used returned to their elements. Knives that weren’t used became dull and eventually turned into crude pieces of metal and wood. Bowls that were not used flattened into circles. Bicycles that weren’t used became unridable. What would a world be like in which everything had to be used in order to retain their shape? We would have a lot less stuff. Perhaps some people would hire someone to wear the shoes they wanted to keep but wouldn’t wear often enough to retain their shape. Keith Richards would have to find people to play his 5,000 guitars so that they didn’t devolve into useless pieces of wood and metal.

Here are a couple of beautiful examples of working with concrete that don’t look heavy or brutalist:
The architecture of Luciano Kruk (homepage), especially this project. The house is beautiful, almost soft and perhaps even light.
Then there is the page of David Umemoto’s Concrete Works, including Spinning Stairs.

I am aware of the environmental impact of concrete. I am also convinced that someone will invent a substance that can take the place concrete. Perhaps instead of pouring it into forms, like concrete, this substance can be grown. The shapes we would see!

Parts of Brazil’s Amazon rainforest are being illegally sold on Facebook, the BBC has discovered. The protected areas include national forests and land reserved for indigenous peoples. Some of the plots listed via Facebook’s classified ads service are as large as 1,000 football pitches.

Facebook said it was “ready to work with local authorities”, but indicated it would not take independent action of its own to halt the trade.

THE SCALES FALL – Is there any hope for our overfished oceans?

You can make your voice heard here.

Industry Ignored Its Scientists on Climate

Industry Ignored Its Scientists on Climate – NYTimes.com
For more than a decade the Global Climate Coalition, a group representing industries with profits tied to fossil fuels, led an aggressive lobbying and public relations campaign against the idea that emissions of heat-trapping gases could lead to global warming.

“The role of greenhouse gases in climate change is not well understood,” the coalition said in a scientific “backgrounder” provided to lawmakers and journalists through the early 1990s, adding that “scientists differ” on the issue.

But a document filed in a federal lawsuit demonstrates that even as the coalition worked to sway opinion, its own scientific and technical experts were advising that the science backing the role of greenhouse gases in global warming could not be refuted.