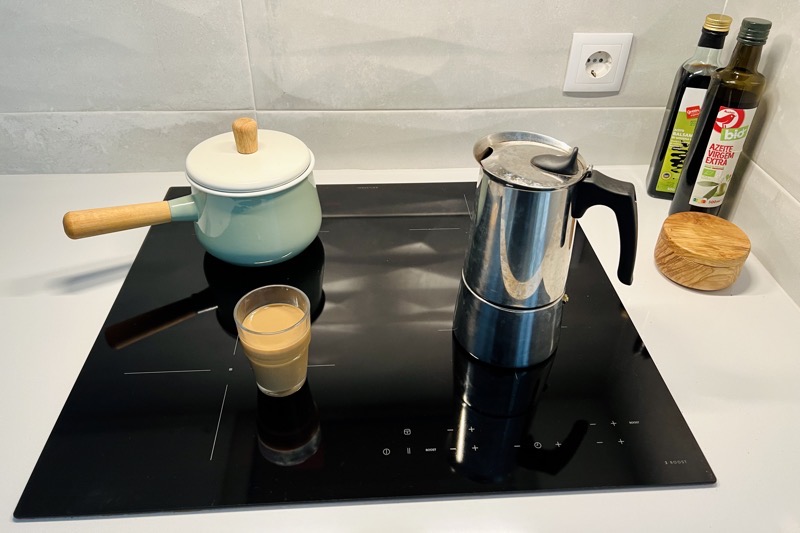 One of the first items I aquired for the flat in Lx was a Moka pot. While I love the original Moka pot design, I don’t like heating water in aluminum and besides, an aluminum pot wouldn’t work with this induction stove. Instead I found this stainless steel version at El Corte Ingles.
The original Moka pot was invented by the Italian engineer Alfonso Bialetti in 1933. Some call it a stovetop espresso maker although the pressure never comes close to that of an espresso machine – it creates 1-2 bar of pressure as opposed to 9 bar of a machine. (Wikipedia Link)
I wondered why it’s called a Moka pot and discovered its connection to a city in Yemen.
Wikipedia has the knowledge:

Mocha was the major marketplace for coffee (Coffea arabica) from the 15th century until the early 18th century. Even after other sources of coffee were found, Mocha beans (also called Sanani or Mocha Sanani beans, meaning from Sana’a) continued to be prized for their distinctive flavor—and remain so even today. The coffee itself did not grow in Mocha, but was transported from places inland to the port in Mocha, where it was shipped abroad. Mocha’s coffee legacy is reflected in the name of the mocha latte and the Moka pot coffee maker. In Germany, traditional Turkish coffee is known as Mokka.