At first I wanted to keep the music pure and devoid of words. I devised a code, based on the time and date of the recording. Here is what I wrote about the code in early 2005:

Since there won’t be any sign-posts in the form of words in the title, the emotional content will need to be discovered by the listener on his/her own without any suggestions from me. It might be interesting to publish my thoughts on each track online a few weeks/months after release of the album.

This was based on my realization that music, especially instrumental music, is a co-creation that involves the performer AND the listener. Later I re-thought that concept and decided that a title is only a small signpost that can guide the listener to the section of the map that a piece of music might live on. Easily enough ignored in any case.

I figured out some of the titles myself and also asked a number of people, including several readers of this blog, to title a piece of their chooseing. The initials of those people follow the titles. The first title, Not One, Not Two, was given by JHR, Joan Halifax Roshi. The beautifully poetic title Nachtreisende Regentropfen (Night Traveling Raindrops) was given by BB – Boris Bartels.

In this spirit of co-creating I asked if a reader of my blog had taken a photo of me during my 2006 solo guitar guitar tour that I could use for the album cover. Ritch Fuhrer kindly sent me the photo on the album cover. For the inside photo I lit a lot of candles in my studio and took some long exposures with the camera on a tripod. 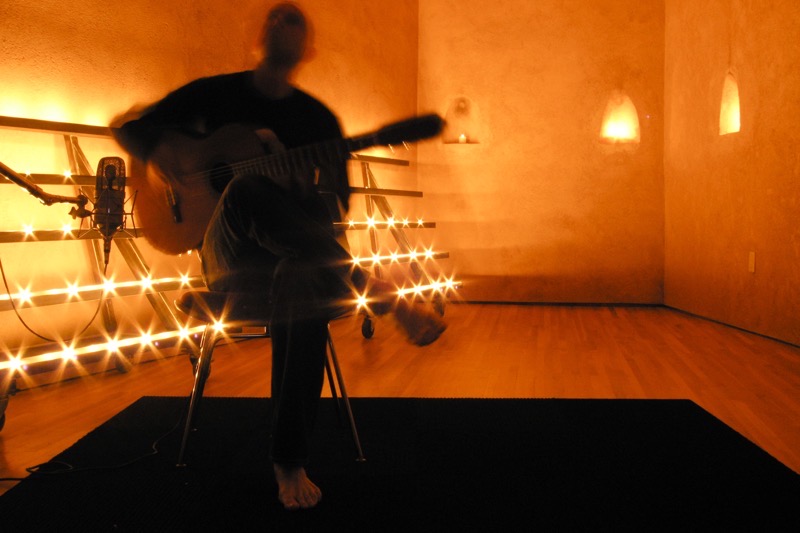