Rome’s 2762nd Birthday Chariot Race at Urban Velo
A patriotic group of bikers sporting giallo e rosso (yellow and red) athletic gear cleverly transformed their bicycles into race horses that pulled bigas, or two-wheeled chariots, manned by enthusiastic charioteers. While ancient Roman chariot teams were divided by color into the greens, the blues, the whites, and the yellows, these modern day Ben-Hurs formed two teams distinguished by their headgear–the helmet heads and the brush heads. Eager for a bit of Sunday-morning competition, they lined up at one end of the Circus and at the signal, the race for glory and fame began!

Anyway, the Danish Cargo Bike Championships was a festive affair in bright spring sunshine. I don’t think I’ve ever seen so many cargo bikes gathered in one place. The course was set up around the square with a fine mix of smooth straights and cobblestoned corners.

There was a race for three-wheelers, with Leif Harup on a Kangaroo taking the gold medal and the three-wheeled glory. Then there was several heats for two-wheelers and Thorsten Rentel beat Hans Fogh by a spoke in the final. In both disciplines the riders rode first without cargo and then had to put three tyres on the bikes to finish.

There were many Bullitts from Larry vs. Harry, a good number of Dutch Bakfiets and quite a few Belinkys. Add to that Christiania Bikes, Longjohns, Short Johns and the aforementioned Kangaroo. Baisikeli was present with one of their ambulance bikes from their African workshops.

Nice audio piece and slideshow in the NYT.

Feb. 17, 1818: Proto-Bicycle Gets Things Rolling
Bad weather in 1812 caused oat crops to fail, and horses starved as a result. That got von Drais thinking about how you could get around quickly without a horse. His first attempt was a four-wheeled vehicle with a treadmill crankshaft between the rear wheels. He demonstrated it to the Congress of Vienna (the peace confab that ended the Napoleonic wars).

That invention went nowhere, but the eruption of Indonesia’s Tambora volcano in 1815 gave Europe a snowy summer in 1816. Oats were scarce and expensive again, horses died, and von Drais got back to work.

This time, he invented a two-wheeler on a frame that looks much like a modern bicycle frame with a seat and front-wheel steering. It didn’t have a chain drive, and it didn’t even have pedals. You drove the thing with your feet, much like a scooter. You stopped it with your feet, too: no brakes. 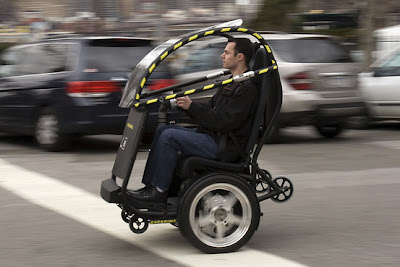 You have a full partner at the US DOT

BikePortland.org » Sec. LaHood: “You have a full partner at the US DOT”
One bright spot that did not go unnoticed by the crowd is that LaHood said he and other transportation officials plan to study European models of bike and walk-friendly facilities this spring (something Portland, New York City, and others have already been doing).

At the end of his speech, LaHood repeated his line about how the US DOT will be a “full partner to accomplish the things you want to do” and he added that, “We are on the cusp of making more progress on these issues than ever before.