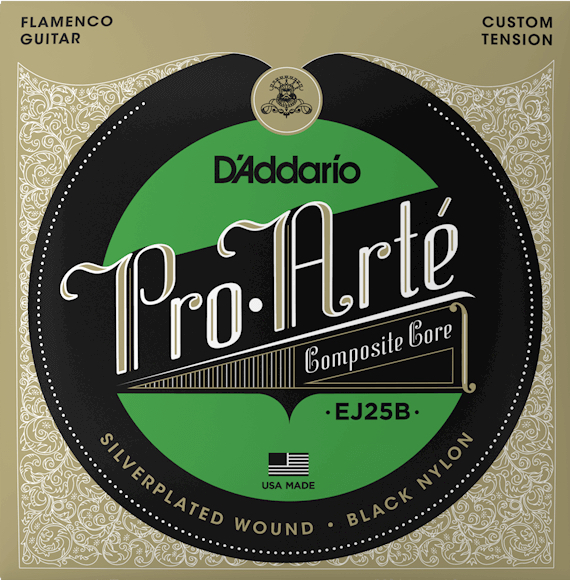 Pro-Arté Composite strings offer the traditional elegance of our Pro-Arte’ line, with the added benefit of an elevated bass response. The exclusive composite core bass strings in the set produce a bold, projecting low-end, providing a more influential tone than nylon basses. Paired with black nylon trebles, this set of Pro-Arte’ Composite strings offers a sound which is both alluring and commanding. This Flamenco Tension set delivers a flexible feel, while still maintaining the quick response that is essential for flamenco players.

I started using D’Addario strings around 1990. I didn’t have a Flamenco guitar when I recorded NF. I only had an inexpensive (around $350) classical guitar and used D’Agostino strings for the basses and Savarez strings for the trebles. Or maybe it was the other way around? Under the microscope of the recording studio, I didn’t find the strings to be very dependable and sometimes I had to change strings several times until I found some that were in tune and the overtones sounded correctly. When we started touring in the Summer of 1990 I had to find something more reliable. I tried D’Addario classical strings and liked them. Each set appeared to be identical. There were simply no bad sets. (I think I rejected only one set in thirty years… that’s unbelievably consistent!)

Sometime in 1990 I was added to the list of D’Addario artists and began to receive free strings. D’Addario responded to problems, like when two D-strings broke during the filming of a TV interview in Canada. Within a few months D’Addario changed the design of the D-string, by adding an additional filament on the inside, and it never broke again.

D’Addario developed the Pro Arté composite strings and I used different versions of those. In 2010 I was using the basses from the EJ45C Composites Normal Tension set and T2 Titanium Normal Singles for the trebles. A year later I discovered the black nylon Flamenco set and have been playing them ever since! When I discovered the EJ25B set and put them on the guitar for the first time I knew they were nearly perfect and a huge step forward. The G string fit much better, both in diameter and in sound, and was more in tune. Nearly 12 years later and I can’t imagine anything better. From time to time different string manufacturers have offered me their strings to try but I have never found anything I liked better. I have been a D’Addario artist for so long that I am grandfathered in… my name is not found among the many names of guitarists on their website. That suits me fine, because I am still getting free strings, which is what matters to me.

I sent Stephen Duros a few sets of EJ25B to try and here is what he wrote:

I’ve always been a fan of D’Addario nylon strings and when Ottmar suggested that I try the EJ25B Flamenco strings, I did. They are exactly what I am looking for in a set of strings. The tension is perfect, the tone is great, bold and punchy. This set of strings has all the qualities I want and my guitar has never sounded better.

So this is my ode to strings. These strings work. I don’t have to wonder whether the B and G strings will be in tune for Waiting in Vain… I can expect a set to last about two weeks and for most of that time it will be rock solid. After two weeks I will hear that some overtones have shifted and it’s time for a new set.

PS: I remember when a member of our crew once offered to re-string my guitar. When he saw my disbelieving look, he said that he played guitar himself and knew he could do it right. I remember replying that while I had no doubt that he would do a good job, I considered changing the strings to be an essential part of playing guitar and that there was no way that I would not do it myself. I guess I wasn’t meant to be a rock star! :-)

PPS: I also appreciate that D’Addario has a recycling program. I participated in all kinds of string programs that collected used strings to send them to areas where people can’t afford to buy strings. These programs didn’t usually last long, shipping costs probably being too prohibitive. The D’Addario recycling program has been going strong for a bunch of years and I always collect old strings in a bag.