On this day in 1975 I went to a concert with my friends. This was my very first concert and I was very excited. We went to see Santana who was on a monster tour around the world. Like many stars of the day he had chartered a plane, which was depicted in the booklet for the triple-LP Lotus, recorded live in Japan in 1974. 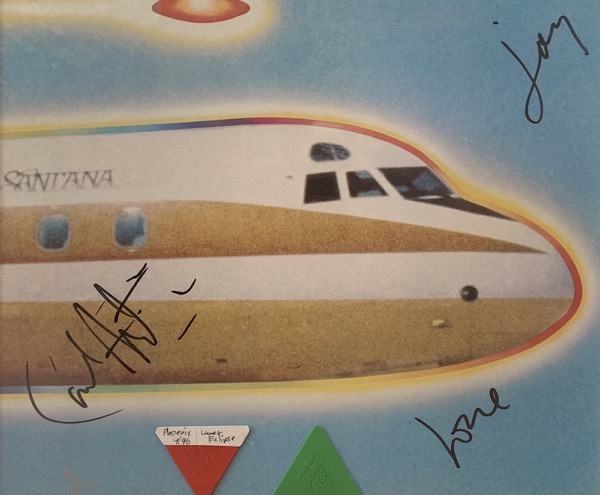 I knew nothing about Santana’s opening act. Then the lights went out and in the complete darkness a booming voice incanted “Earth, Wind and Fire” and when he chanted the last word two columns of fire rose from the dark stage… then the music began. Most of the band was using wireless technology (in 1975!!!) and frequently the whole band, except for the drummers, ran around the stage… exiting on one side, running behind the stage and reappearing on the other side. Never again have I seen an opening act get three encores. After the third encore all of the hall lights went on to calm down the audience.

Then Santana started playing. They were very good, of course, but we were under the Earth, Wind & Fire SPELL! Toward the end of Santana’s customarily long set, several E,W & F musicians came back onto the stage, among them the guitarist. He took a solo and after his solo we noticed a shift in Carlos’ presence. He started glowing and when he played he threw his head back and magic happened. An unforgettable evening. That evening may very well be responsible for me becoming a musician. I received Lotus as a gift and wore out those LPs! I learned several of the melodies by ear, among them, of course, Samba Pa Ti!

Fast forward to 1991: we are in the studio recording our first album for Epic Records, to be called Solo Para Ti. I wanted to record Santana’s Samba Pa Ti and talked to my product manager at Epic, Al Masocco, about how I could ask Carlos to play guitar on the song. At the time Santana was under contract at Columbia Records and both Epic and Columbia were under the umbrella of Sony Music. Introductions were made and Carlos agreed to play the solo. A few weeks later I drove to the Bay Area to record Carlos, who wanted to work in a recording studio in Sausalito that he was familiar with and with an engineer he knew. In addition to the solo on Samba Pa Ti Carlos also played on my composition Reaching Out 2 U. The latter is a truly amazing solo I have listened to countless times!

In 1996 Santana asked me to open for their US tour. Luna Negra was a quartet at the time, with Jon, of course, Carl Coletti (drums) and Ron Wagner (tablas + dumbek). We would perform for about 40′, then Santana would take to the stage to a song by Miles Davis (perhaps from the album doo-bop?) and play for half an hour. At that point the four of us would join the Santana band on stage and play several songs with them. Samba Pa Ti, of course, but also a tune called El Mar from George Benson’s White Rabbit, and a melody from the Concierto de Aranjuez. There may have been more, but that’s what I remember. We played together for a half hour, maybe. Santana’s long performances are legendary and most nights we were in our bus, driving to another city while he was still playing.

Tomorrow… a few memories from that tour.