For three days I hiked up a mysterious cone-shaped mountain in an isolated area of a distant Chinese province. It was distant, because I had to take three trains, four buses, and hire a driver to take me to the bottom of the mountain. It was isolated, because there was no cell signal and the last village was by now many miles behind me. It was mysterious because the mountain could not be found on Instagram or, in fact, anywhere on the internet. I had heard about through a long search that was conducted in person over a span of decades.

I carried a backpack with food and a small tarp that kept rain and wind from me while I slept. It was warm enough to forego a sleeping bag, but on my third night I was high enough up the mountain that I regretted not having a sleeping bag with me. I wore everything I had with me and still shivered under the tarp.

On the fourth day, late in the afternoon, I came upon a small clearing with a river running through it. I could hear a waterfall further up the mountain. Frankly, I believe it was the noise of the waterfall that masked my approach. As I turned around a corner the path fell away toward the clearing and I saw him dancing with his hands up in the air. One of the hands was holding a large brush. Looking closer I noticed that the brush was made from grass blades that were tied together and attached to a stick of wood.

His hair was long and unkempt and his clothes in tatters. Suddenly he stopped his strange dance and, inspired, he dipped the brush into the river and wrote on a flat rock that was worn smooth and free of any dust. The calligraphy was beautiful, transcendental, incomparable, precious. After writing a few characters that were as fluid as they were deep and layered, he stepped back and made a sound that was clearly a demonstration of satisfaction, but sounded more like a crazy cackle. I was close enough to read the large characters but the first character was already disappearing by the time I had read the poem. Was it a poem? Perhaps I can better describe it as spiritual axioms, deep aphorisms. I was torn between trying to memorize it and wondering whether I should capture the drying characters with my camera.

In the end I decided to stay hidden, breathing quietly, and craning my neck to see what the old man wrote. It was fleeting, but I was sure that if I were to jump forward to photograph one of the masterpieces, and that’s clearly what they were, the man would run away and I would miss out on the next batch he might write. Forty-five minutes later the sun started to go down and the man left, in a lose gait that seemed like running and crouching at the same time.

I never regretted not taking a single photograph as the experience stayed with me and I could recall it clearly even many years later. I never saw the old man again. He remained hidden after that first encounter. I was never the same. 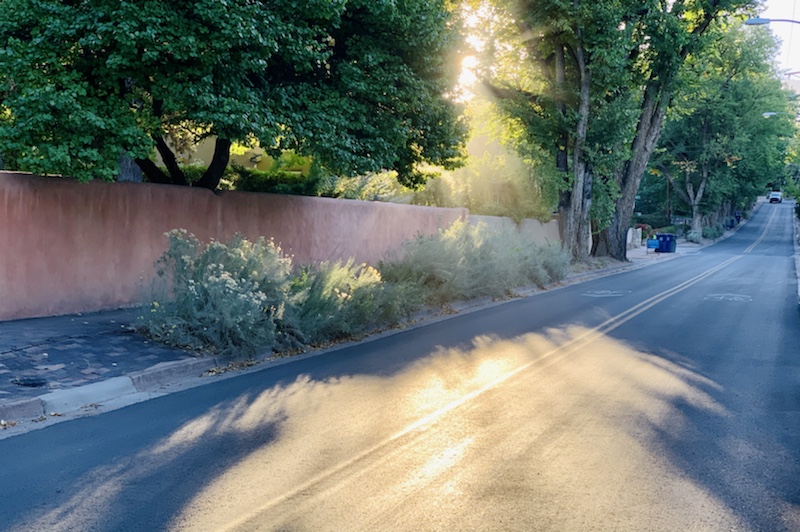 After my, albeit limited, experience producing music in Boston I knew that for me the mixing process was a very very integral part of creating music. The studio, and most importantly the mixing console, IS an instrument. With the mixing desk we create the canvas that becomes the soundstage, the landscape for the music to live in. With the mixing desk we also filter the colors that are involved in the particular piece of music. The musical instruments are the brushes and the musicians supply the painterly technique. (((I went to art school so a lot of my metaphors come from that world)))

At first I relied on engineers to help me find my way around mixing consoles and patch bays, but starting with La Semana, released in 2004, I mixed and mastered every single release.

A little bit of history:

In the Nineties mixing consoles with automation became available and were used by most pop stars. These machines had moving faders… which meant that each of the faders, and some of them had up to 96 channels/faders, had a motor that would move it. That’s a lot of motors that could fail… These consoles were also gigantic. They looked cool, but they cost around a million dollars and studio rental that involved them was therefore enormously expensive.

We recorded several album at Sound Design in Santa Barbara between 1990 and 1993: Poets & Angels, Borrasca, Solo Para Ti, and The Hours Between Night + Day. The analog recording machine was a 24 track Studer, the console sounded great but had no moving faders. Sometimes we mixed with all hands on deck. Thirty seconds into the song one person would slowly pan an instrument track, or an echo, from one side to the other, while another person might turn up the bass during a solo section. I wish I had some photos of three or four of us with our hands on different faders and knobs. And every mix was a unique performance. You got one little turn of knob wrong you had to start over. In that sense the mixing console became an instrument we had to perform with.

In fact every time you returned to working on any song you had to start over setting EVERYTHING up. Every EQ, every level, every pan, every reverb and echo setting… all had to be entered for that song… EVERY TIME. I remember wanting, no needing, to change the mix of Samba Pa Ti for the album Solo Para Ti and rushing to the studio early in the morning on the very day that the engineer had an appointment with Doug Sax at The Mastering Lab in L.A… We set up the mix, recorded the result and he jumped into his car to make the appointment.

Doug Sax mastered every album of mine starting with Solo Para Ti in 1991 and ending with Innamorare in 2000. Doug Sax had great ears and great custom built gear… he also mastered a lot of Pink Floyd albums. In 2000 he asked why I came back to him when my mixes sounded so good already. From then on we mastered albums at my studio.

Viva! was the first album that was mixed at my new studio in Santa Fe, in 1994. I had invested into a mixing console that had many great sounding analog parts, but used a PC-based computer to recall everything. At $120k it was a relative bargain and it was compact. The problem with the console was that I never really understood it. So I hired the guy who came to set up and demonstrate the console to be my engineer. Gary Lyons (((he shares the exact spelling of his name with a UK engineer/producer and if you go to AllMusic you see both of their work listed together))) engineered the mix of Viva! in 1995, and subsequently every album starting with Opium and ending with The Santa Fe Sessions, which was released in 2003.

For Opium the engineer Gary Lyons and my brother Stefan mixed the music. It was an experiment because I wanted to test my theory that the first impression is most important, an experience that gets lost after working on a mix for hours. So Gary and Stefan would make a mix and then they would play it for me and we would discuss my reaction to it.

In the Arms of Love was the first album we recorded digitally, using a Macintosh. I understood the Mac and by the time we worked on The Santa Fe Sessions I would work on the album by myself from time to time. In 2003 I bought a Power Mac G4 with a Dual 1.25 GHz Processors. I used that machine from 2003 until this year when the power supply died and I had to replace it with a used G4 with Dual 1.42 GHz processors.

The Hidden Costs of Streaming Music | The New Yorker:

Like everything we do on the Internet, streaming and downloading music requires a steady surge of energy. Devine writes, “The environmental cost of music is now greater than at any time during recorded music’s previous eras.” He supports that claim with a chart of his own devising, using data culled from various sources, which suggests that, in 2016, streaming and downloading music generated around a hundred and ninety-four million kilograms of greenhouse-gas emissions—some forty million more than the emissions associated with all music formats in 2000. Given the unprecedented reliance on streaming media during the coronavirus pandemic, the figure for 2020 will probably be even greater.

The whole article is worth reading.

High overhead, an open hole, or oculus, invited the sky in. Rome’s Pantheon uses the same device to magnificent effect, but Nero’s Octagonal Room did it first.