These two images were scanned from a rediscovered contact sheet, photogaphed by Reisig & Taylor in 1997. Images from this session were used for the covers of Leaning into the Night and christmas + santa fe. Gabrielle Raumberger, whose company EPOS designed several of my albums for Epic Records in the Nineties, came to one of our shows in California in February and brought me a bag of great old stuff, like these contact sheets she had discovered in her office. February and touring and making music with others seems like so so long ago… 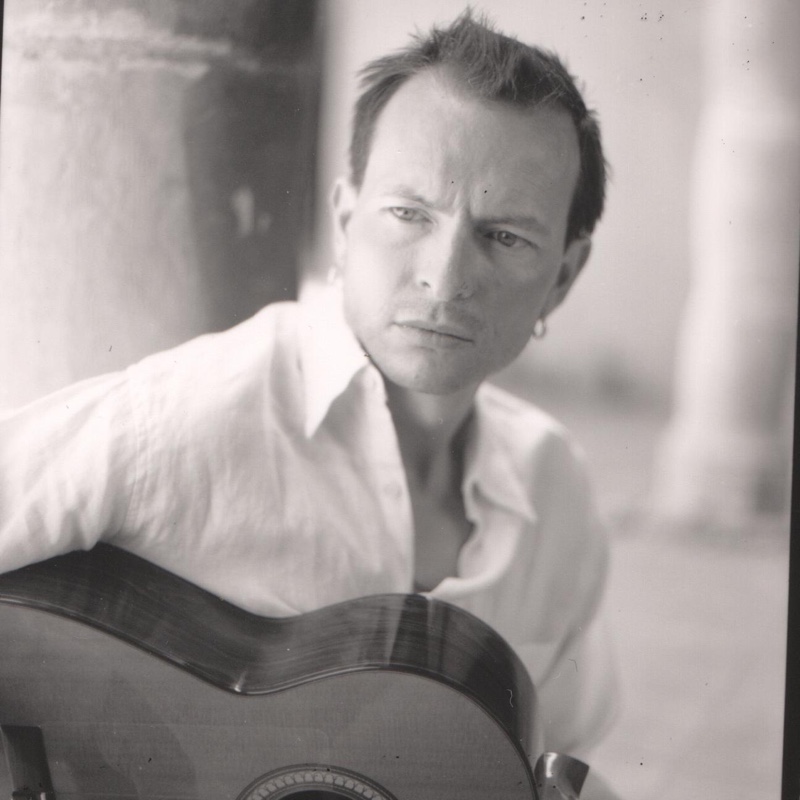 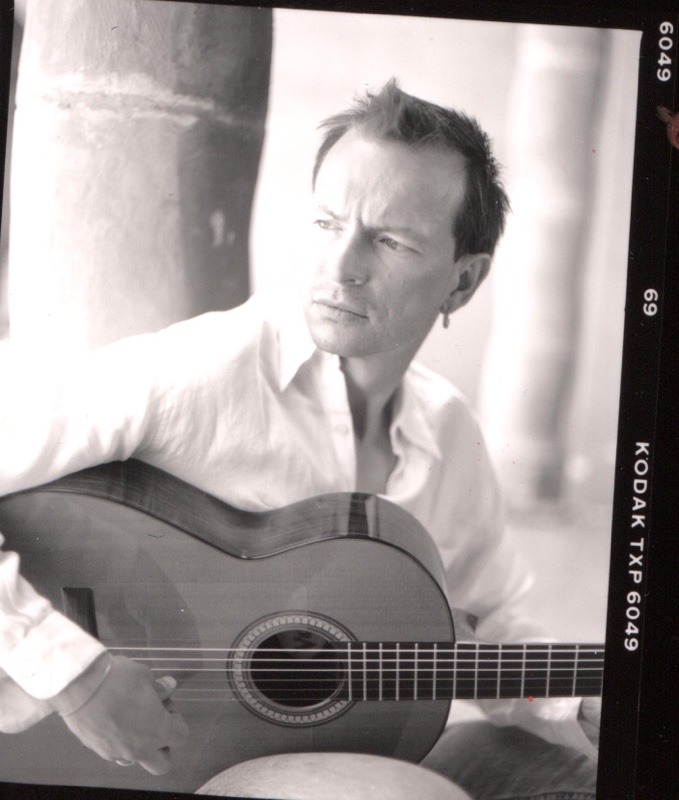 I know that everyone is experiencing their own struggles during these interesting times, but perhaps I can nevertheless entertain you with mine. My struggle wasn’t grand and had nothing to do with hunger or disease, but it was frustrating.

On Wednesday morning I could not start up the 2003 G4 Macintosh that powers my studio. At first I considered my plan B, which was to move the ProTools HD PCI cards from the computer to a Magma box I bought about ten years ago. At that time I thought how grand it would be to connect the ProTools cards inside the Magma either to the G4 or to my laptop, so I could edit or record somewhere beside my studio. It turned out that while my laptop could easily connect to the ProTools HD cards in the Magma, the G4 was crashing too often when connected this way. So I moved the cards back into the G4 and the Magma box was languishing in the back of the studio.

I opened up the G4 and the Magma box and moved the cards. In order to connect the Magma to the newish laptop I had to use not one, but two adaptors. One connected the old laptop PCI standard to a newer, and slimmer, laptop version, and the second one adapted that to a female Thunderbolt2 connector.

I downloaded ProTools Free and discovered that it wasn’t compatible with the macOS version that was installed on the laptop. I downloaded the software to an older laptop and was able to start it up. After an hour of configuring the software I connected the Magma box… but neither the laptop nor the ProTools software could see the connected hardware. Oh well, perhaps the signal was lost somewhere in the adapters. 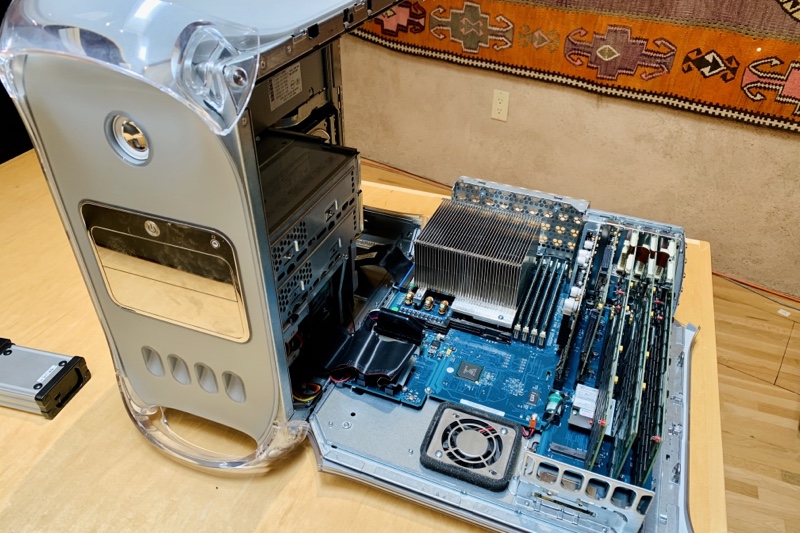 I realized that in order to continue working on the new album I had to get the G4 going. I opened the computer and moved the cards back into it. The computer started up. I shut it down, moved it into the enclosure in the back of the studio, and it started up again. When I plugged in the USB cable that connects to the USB extension the G4 shut itself down immediately. I plugged in a different cable and the computer started up. I went to the house to have a bite to eat. When I returned the computer would again not start up. Power button? Power supply? I put a new battery into the G4 – computers have a battery that, among other things, keeps the internal clock going. I reset the PRAM. I ordered an old iMac keyboard I found on the internet, an odd keyboard that has a power button on the keyboard itself that said to override the power button on the front of the machine. 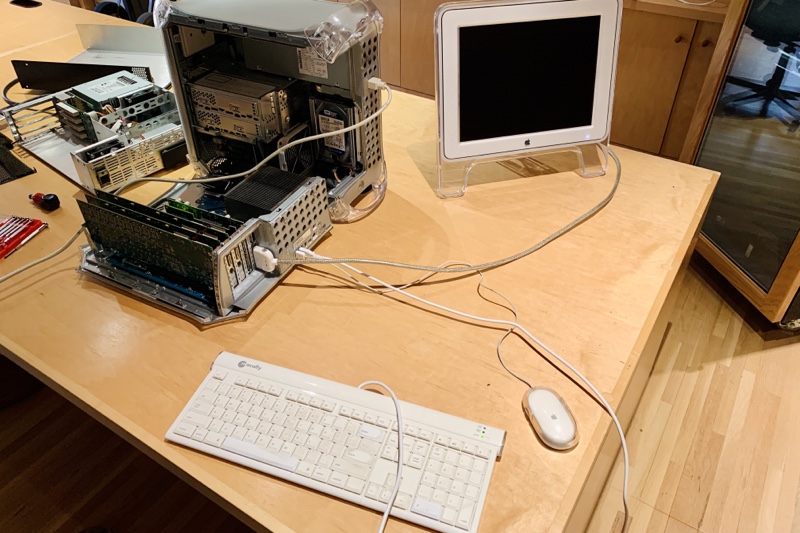 On Friday afternoon I was able to start up the computer and work for a couple of hours. The computer worked perfectly and gave no indication of anything being amiss. Saturday morning it would not start up. The keyboard with the magical power button arrived that morning and I connected the keyboard… nothing. I gave up and played guitar for an hour. It’s now Sunday morning and the mystery persists. Is it a loose wire somewhere? Is it just a temperamental old computer?

Dear Vintage Man, I will have to think deeply to understand why you don’t have a new computer and cloud storage. There must be an important reason.

There isn’t one important reason, but there are several small reasons.

I don’t like throwing things away and tend to use equipment as long as it works. I don’t upgrade a hammer, so why should I keep upgrading a computer every couple of years. I do admit that when I recently switched from a 2008 laptop to a used 2015 model I happily experienced the advance of technology.

The old G4 Mac is in the back of the control room, its noise kept to a minimum by a dust-free box with four quiet cooling fans. It is connected to a video extender and a USB extender that amplify the signals and send them through long cables in a trough built along the wall and through a pipe under the floor. The cables emerge from the floor under the mixing desk and connect to two screens, a keyboard, and a mouse on the desk. Twenty years ago this was super cool. :-) If I was to buy a new computer, I would also need new screens and, worst of all, I would have to replace the wiring… that would not be fun!

Recording music feels more like a hobby these days. Recordings are an advertising that says I am still making music, so please come to a live show. One doesn’t make much money with recorded music. I can’t justify spending more money than I would make from the income of two new albums on new hardware, while the old hardware is still working. Yes, there are musicians who still make a lot of money, but it is less than 0.1%… Sound familiar? That tip of the economic pyramid becomes sharper every few years and the 10 percenters became the 1 percenters and now they are the 0.1 percenters. I read that about 90% of new albums on iTunes sell less than 100 copies. That’s astonishing, isn’t it?

In any case I am forced to look into alternatives, because my G4 has been misbehaving all week.