The reason I started making bread at home was simple: I could not find decent bread where I live. Having grown up surrounded by bakeries, and with fresh rolls and crusty sourdough bread a staple that could be counted on when I came home from school, this was a problem for me. There were so many neighborhood bakeries that my family became very discerning… we would go to this bakery for the freshest little bread rolls, to that one for the best large sourdough loaves, and preferred a third one for sweet items.

A baker told me that it wasn’t possible to make bread in a home oven, because the dough needed steam to develop a soft crumb, and home ovens expel humidity. Professional ovens were designed to contain humidity and have a mechanism to inject steam to create the perfect crumb. For decades I believed this to be true and unhappily made do with the bread I found in local bakeries.

When I had lived without good bread for many years, I suddenly felt that the difference between a house and a home was… bread. The smell of bread was home. I searched the internet looking for a solution to baking bread in a home oven and five years ago I discovered a book by an American baker. The book was called Tartine and it discribed a method of using a Dutch oven to contain the moisture in the dough in order to create a soft crumb. After twenty minutes of baking one removed the top of the Dutch oven and the bread could then develop the dark crust.

According to the book’s instructions I mixed water and flour with my hand and waited patiently for it to attract that mixture of wild yeast and microbes that becomes the sourdough mother, that magical substance that makes the dough rise and which creates the beautiful airholes in the bread. Making bread is alchemy. By taking the most simple ingredients, water, flour and salt, and turning them into bread, one claims membership in humanity, for only humans use fire to create food. Breaking bread is a sign of making peace in many cultures. Sharing bread is a sign of making a stranger feel welcome. 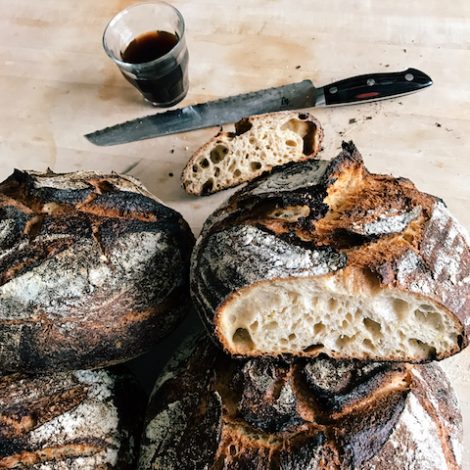 I was lucky and the very first loaves turned out well enough. The house suddenly smelled like a home. Every Sunday morning I made dough and worked it from eight o’clock in the morning until about five in the afternoon, when I turned the oven on to bake. I discovered I loved the pace of making bread, which combines waiting with stretching and folding the dough every half hour. It felt right, this combination of doing and waiting, breathing in and exhaling, like growing plants or creating art… action followed by observation and contemplation.

In time making bread has become part of me, like meditation and playing the guitar before, and today I cannot imagine my life without a weekly bread day, the day that starts with choosing ingredients from the cupboard, mixing them together with water and the leaven that was prepared the previous day. Bread day is punctuated by examining and turning the dough every half hour, and always culminates in turning on the oven and getting ready to bake. And by the end of that day my house always smells like a home.