Snow against a Window 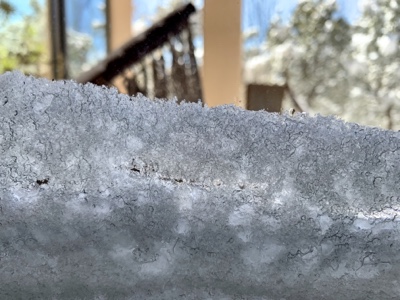 I remember reading an interview with a classical guitarist a long time ago. She said that one has to file one’s nails a little bit every day. At the time I figured that the statement was hyperbole, but eventually I figured out that she was right. Nail care is the most underrated aspect of a nylon string guitar player, whether they play classical or flamenco guitar.

In places where the humidity is high nails grow faster, as does hair. When playing in Florida I may have to file my nails every single day, but in a dry climate like New Mexico or Arizona that’s not necessary.

It amazes me how differently guitar players file their nails. There are many different ways people do the filing itself, and also many different shapes that they give their nails. Some guitarists file only in one direction, others file back and forth, some go for flat nails and others for slightly pointy ones. But no matter what, it’s something a guitarist has to deal with all of the time.

It is not good when one walks onto a stage, excited to perform, and then discovers that the nails grew a little too much… and suddenly one gets stuck on strings. A fraction of a millimeter is all it takes to throw the guitarist off and too long is as bad as too short…

I sometimes wonder whether one can observe how people open doors and cupboards and know immediately whether they are guitar players. As a teenager I trained myself to open everything with my left hand, so I would not chance breaking a nail.

There are two reasons to fortify one’s nails: to prevent ripping part of the nail off accidentally during the hours of the day that one doesn’t play guitar, and to enable the player to create a stronger tone. The latter is especially important when one performs with a drummer. Being able to play a little louder makes the sound engineer’s job a lot easier.

Recently I did some research into different ways to protect my nails. In the late Eighties I used a few layers of superglue. In the Nineties I added baking soda. This created a much stronger nail, but was frayed with danger. Adding too much baking soda to the superglue created so much heat that I could develop a blister underneath my nail, a terrible experience. In the late Nineties I switched to acrylic powder with superglue.

Last year I experimented with a bunch of different nail polishes. I figured that since nail polish is a billion dollar industry a lot of research must go into improving it.

I discovered that good nail polish is not actually very hard, and certainly not as hard as superglue with acrylic powder, but it is flexible. That’s how chipping is prevented, and the polish appears to self-repair. And that doesn’t work for guitar playing because it ruins the attack. The nail polish seems to absorb the guitar string rather than to bounce it back.

So now I am back to using acrylic powder and super glue. I did notice that it makes a big difference when I remove the natural oils from my nails by putting a little nail polish remover onto a cotton pad and wiping the nails before brushing on the superglue. And, because it is nice to try something new, I will start using a black acrylic powder I recently found.